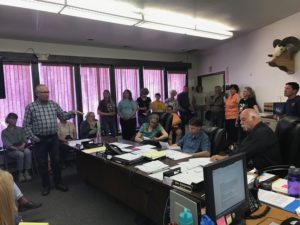 The Ferry County Rail Trail project is up and riding again after county commissioners approved the next stage of the project at a meeting earlier this month.

In late March, the commissioners removed several long-time volunteers from the county’s Rail Corridor Committee. Additionally, the commission hesitated to approve a $165,000 Recreation and Conservation Grant approved by the state and funded by the Legislature.

Trail advocates saw those moves as thinly veiled attempts to sabotage the project. However, commissioners said they were simply doing due diligence as elected officials.

In May, that all changed.

For at least a decade, Ferry County residents have worked to turn an old railroad line into a nonmotorized trail system. The project has received numerous state and private grants. But the commissioners have held up the completion of the project in various large and small ways, Whittaker said.

But the newest move is hopeful and Whittaker believes the project can move forward.

“I think that the Ferry County commissioners are reticent to acknowledge how important recreation tourism is going to be for Ferry County,” he said. “We’re trying our best to educate them to that potential and the rail trail embodies that.” 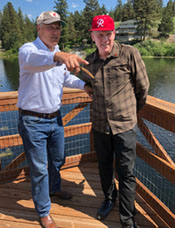 On Wednesday, the group got an additional boost when Gov. Jay Inslee stopped for a visit. Inslee was in Ferry County visiting flood-ravaged areas. But he took about an hour to meet with Whittaker and others and walk a portion of the trail.

“If you want a great adventure, this is a great place to bring your family and ride bikes,” Inslee said in a video.“We’re going to brag about you statewide.”

The rail-to-trail project has benefited from widespread community and regional support. In 2009, residents in a county advisory ballot voted 61 percent to allow only nonmotorized use of the abandoned railway.

The project has been successful in securing outside funding, including a $200,000 federal transportation enhancement grant to put a deck on the trestle across the north end of Curlew Lake. That was followed by two state grants totaling $270,000 for resurfacing 13 miles of the trail and installing two vault toilets.

Ferry County is one of the state’s poorest counties. Whittaker said Inslee “really wants to help Ferry County develop its tourism-based economy in addition to forest management and mining.”

As for Whittaker, he’s just excited for the project to be finally finished.

“I can’t wait to be on that trail smiling instead of in meetings,” he said.