REPUBLIC – A guitar signed by Pearl Jam lead vocalist Eddie Vedder was auctioned off for $12,100 to raise money for two projects Ferry County resident Bobby Whittaker holds dear: a movie about a return to Mt. Kennedy and the Ferry County Rail Trail.

The movie features sons who return to a remote mountain in the Yukon named for John F. Kennedy. In 1965 Robert F. Kennedy and Jim Whittaker were the first to climb that mountain. 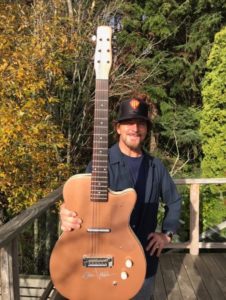 Fifty years later the sons of the original climbing team—band manager and rail trail activist Bobby Whittaker, 2018 candidate for Illinois governor Christopher Kennedy and Bellingham mountaineer Leif Whittaker—embarked on an expedition to celebrate the climb and the bond that connects them all.

That venture resulted in the film “Return to Mount Kennedy.”

The film was screened to a packed house in Seattle on Dec. 9, and will be featured again on Feb. 19 in Seattle.

A Spokane showing is scheduled for Saturday, Feb. 16, at 7 p.m. at the Bing Crosby Theater.

To help defray final production costs for the film, Vedder offered the vintage Danelectro guitar for auction. A portion of the proceeds will go to the nonprofit Ferry County Rail Trail Partners. The guitar was autographed by Vedder, who also penned lyrics from his song “Rise” on the back.

“Return to Mount Kennedy” spans generations, reminding how every trail connects through the enduring friendships built in the mountains, one review said.

“The film is pretty down to earth,” Bobby Whittaker said. “Everyone who sees it laughs and cries. I love that my friends, family and Ferry County are all in the film; it’s a perfect combination.”

The exact percentage of the money brought in by the guitar auction that will go to the rail trail has not been announced, but Whittaker said it is appropriate given Ferry County’s role in the film.

In addition to the portion of the guitar auction, the Ferry County Rail Trail Partners has also received a large donation from a donor who wishes to remain anonymous. FCRTP Vice President Keith Bell said this money will be earmarked to provide matching funds for future rail trail development grants.